Angels with Scaly Wings Wiki
Register
Don't have an account?
Sign In
Advertisement
in: Characters, Side Characters

Lab coat
Damion is a scientist who works at the production facility as Anna's assistant.

Damion is an envious guy who blackmailed Anna in order to benefit himself from her research, eventually he got raided by the police, causing Anna's actions to come to light anyways.

He always acts annoyed with everyone around him and does not wish to talk. 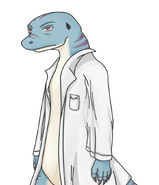 Community content is available under CC-BY-SA unless otherwise noted.
Advertisement