Police badge
Bryce is the town's Chief of Police and a regularly recurring character in the main story. He attempts to enlist the player's help with investigations after the incident at the portal with Reza and Maverick.

Bryce is a strong and caring dragon, who is dedicated to his work as chief of police and the city as a whole. He happily shoulders the weight of his post and does what he thinks is best for the city in whatever he does. He has become very popular among the locals who support him with great praise, and although he takes pride in these facts, he still frequently resorts to alcohol as a means of easing the stress and difficulties that come with his position. He is proud of his body, and typically wont hesitate to show off. He values friendship and loyalty above all else.

Bryce used to love playing "Explore" with his friends, the game consisting of everyone splitting, going exploring new places or locations and then sharing their discoveries, one day though, Bryce's friends had to stay in school longer, the bored and little Bryce went alone to explore an ancient cave system, it wasn't very complex, however the ground below him collapsed and he got trapped, trying to climb his way back, he fell and cut his snout with a rock, he was rescued and healed a few hours later.

Bryce got his neck scars when Miles bit him, he was saved by the confused young recruit Maverick who got traumatized after that case.

- Reza shot Maverick and ran off.

b) Walk in the park:

- They were inflicted with a sharp implement.

- It could have only been someone with hands.

- He did not want to make any noise.

- At least that means someone will find him, right?

- I'm having a drinking contest with a dragon. How could I not love this?

- That's my tactic, make you think that I'm struggling so you'll let your guard down.

- Why are you so damn attractive?

- If you think I'm giving up, you're mistaken. This isn't over.

- Put some pepper on his nose.

- I dislike all kinds of stairs.

- As some sort of camouflage.

- Why would he have stayed here if he stole it?

- So you think it was Reza.

- Thanks for the invitation.

- You're the pinnacle of masculinity.

- Not that I'd mind grabbing your thigh.

- [Flex your own puny muscles.]

- Do whatever you want until he returns.

- Maybe it's not going to be a big deal.

i) When meeting Emera:

- It is my best bet at finding the truth.

j) Third investigation: Successfully investigate 2 places and, if you go to the police archives, don't play a prank on him.

k) Third date: Don't aggro Maverick at the start and you'll be fine.

- Is that you, Sebastian?

- Tell her how you really feel.

- Not if you're uncomfortable with telling me.

- There's no need for you to sleep on the floor.

- The couch is big enough for both of us.

- Tell Maverick to wait. (You need Anna's test results to get this option which is vital to achieve Bryce's good ending!)

- I'll do it. (This is also vital, making Bryce go first results in him getting killed!)

- It meant exactly what you thought it meant. 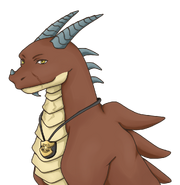 Bryce after you go to get a second bottle of wine
Community content is available under CC-BY-SA unless otherwise noted.
Advertisement